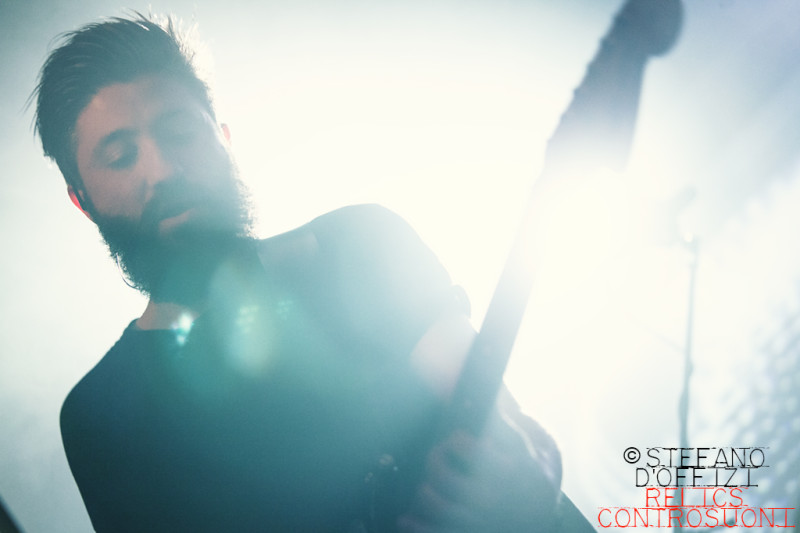 Sonic Jesus​ is an Italian musical project formed in 2012.
Internationally acclaimed since the very beginning, thanks to the instantly sold-out debut on Fuzz Club Records (Sonic Jesus EP, 2012) and a cult split featuring the ​Black Angels (Split Single N°5, 2014), they took part to the ​Reverb Conspiracy twice, the ​Cosmosis Festival (featuring the Jesus & Mary Chain), the ​Eindhoven Psych Lab and the ​Reverence Festival. During the years Sonic Jesus performed live throughout Europe and shared stages with Damo Suzuki, Dead Skeletons, A Place To Bury Strangers and Singapore Sling for whom they opened the European leg of his tour. The long-awaited first double LP ‘​Neither Virtue, Nor Anger​’ (Fuzz Club Records, 2015), completely self-recorded and produced, confirms their own skills to renovate and transcend genres and forms, all condensed in an impressive masterwork.
New album ​‘Grace’ ​(Fuzz Club Records, 2017) goes beyond the past boundaries, pushing towards enthralling melodic horizons and handsomely modern pounding beats.

After releasing the widely praised granitic double LP ‘​N​either Virtue Nor Anger’ and an intense period of touring around Europe, it seemed like Sonic Jesus’ fate followed an already traced path.
Two years later, it comes ‘Grace’ instead. A work that quest the inner nature of the band itself, uncovering the mercurial and experimental temper of Tiziano Veronese.
Utterly written and conceived by Tiziano during a long-lasting springtime, the new album unhinges the previously psych-drone approach. It dives deep into more synth/post-punk sounds and tied up to the most recent and inn​ ovative anglo-american ​wave tradition, reminiscent of early Interpol and Editors.
New shades and new colours, a different light brighten up the monolithic stillness typical of the debut, so that the tight coldness of drums and arps stands out from the rest.
Several fresh elements overturn the once guitar-driven writing that discovers a primitive, sensual, melodic voice playing along with lively bass lines and ​tronic influences, just a few steps far from the latest works by Trentemøller and Moderat.
Marco Barzetti (formally ​Weird.​) composed the lyrics. Existential themes underline the close relationship between man and universe, where a welcoming Mother Nature protects the main character from the recurrence of past nightmares, by offering new dreamscape perspectives as well as a future salvation.
Each end carries a new start: ‘​Grace’​ turns the page and rewrites the tale of Sonic Jesus.