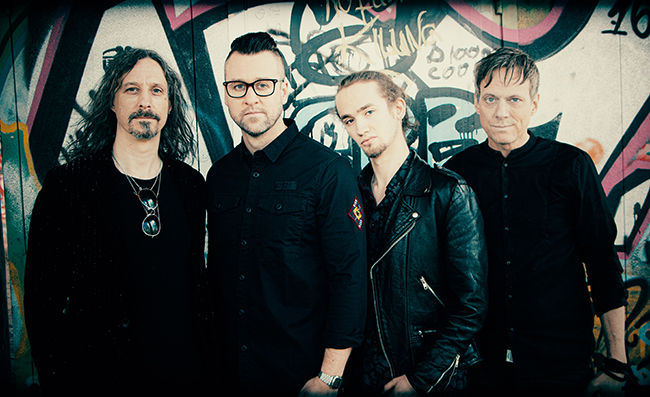 We had the chance to  interview the PreHistoric Animals, svedish progressive metal/alternative band, who just released its second studio album, The Magical Mistery Machine – Chapter One, on last 30th September (you can read our album review HERE).  Stefan Altzar, Samuel Granath and Daniel Magdic answered to our questions in a funny and enthusiastic way, talking not only about their new work, but also revealing funny and interesting stories about their past…and letting us know that great surprises are coming on the next future! So.. let’s start the interview with our Giovanni Cionci.

1- Hello, and thanks for accepting to dedicate a bit of your time to us and to our readers. Could you please tell us something about the story of your Pre-Historic Animals project and why did you choose that name?

Sam: Prehistoric Animals started in 2015 as a two man project with Stefan Altzar and me. We had worked together previously and wanted to work together again with some alternative/progressive rock ideas we had. Stefan came up with the name and it has to do with the the fact that some less gifted people might consider our music to be out of date, haha! Plus we’re not 15 years old anymore so it seemed suitable in that respect also. And after we released the first album people started contacting us to perform live at different festivals, so we realised that we had to become a real band. And then luckily for us, Daniel and Noah (Magdic and Magnusson, Editor’s note) joined us!

2 – Your second album, published in september, The Magical Mistery Machine – Chapter One, got a lots of entusiatic feedbacks due to your very “personal” and original sound, which was already present in your 1st album (Consider it a Work of Art, released in 2018), but now it sounds as much more mature. Which factors made your sound grow up so quickly, and your music so special and unique?

Sam: The change in sound from the first to the second album I’d say has to do a lot with the addition of Daniel and Noah to the band. And we also have to give a lot of credit to Erik Berglund who mixed and mastered the new album. Brilliant guy!

3- Which artists mostly influenced your style?

4 – What’s your favourite track of the album? Why?

Sam: My favourites from the new album keeps changing  but right now I’d say the title track because of its dynamics with both soft / rough parts and the pretty dystopic all around feel to it. What a Lucky Day is another favourite for me.

Daniel: My favourite tracks changes for me as well. Just like Sam I like the title track, but I also love What a Lucky Day because it has some of that Rush feel which I tride to consolidate with the guitar sounds. Floodgate is one track I really looking forward playing live!

Stefan: I think What a Lucky Day is my favourite for the moment

5 – Daniel, congratulations for the extraordinary work on guitars: great riffs, amazing and tasteful solos, expecially the last one at the end of Into Battle (Like my Father): wonderful ending of a great album.  I speak with your band mates: do you think that something changed in your “strenght” when he joined the band?

Daniel: Thanks, but that outstanding solo is actually Stefan! (laughs)

Sam: Daniel is such a great guitar player and songwriter, and a great/fun guy to be around! So we’re very happy that he joined us! I also have to mention his beautiful and heavy guitar sounds which I like a lot!

Stefan: Haha!! One thing that changed is that Daniel gets credit for my solos. Seriously, he’s the perfect combination of a great guitarist and a great person. I think a lot has changed to better with Daniel in the band.

Daniel: I just have to add that I’m not that nice – you guys just make me a better person!

6 – Daniel, you joined Pain of Salvation in the beginning of their story, and you took part in composing and recording their 1st, amazing album Entropia. Can you tell us something about the importance of that experience in your musical “travel”? What’s your best memory of that experience?

Daniel: Well I started to play with Daniel Gildenlöw in the 7th grade – I was 13 years old. That period of time is very formant so of course it has been very important for my development musicaly. For some years me and Daniel where together 24 hours a day and it was all about music (well almost anyway). We listened to very much the same music at the time, Kiss, Queensryche, King Diamond. I remember that when we went to sleep late at night we actually put a cassette player on autoreverse so that there where music even when we slept. So I think we both had an impact on each other. We meet sometimes and play together (with Johan and Johan) and it still feels like home playing together and that is probably because of us developing together in those early years. When Entropia was recorded most of those songs where already old for us and most of One Hour by the Concrete Lake was already written. Actually my contribution song wise is bigger on Concrete Lake. One example is the different drop tunings on that album – it’s a direct consequence of me listening to King’s X Dogman album (we actually did a cover on that song once).

It is hard to pick one special memory. I would say that it is that whole period of time and that friendship that was built and that is still there. I would say that we where as close as brothers you can be without having the same parents.

7 – Lately we lost one of the greatest guitarist ever, Eddie Van Halen. Would you like to tell us something about him?

Daniel: I was not so much into Van Halen myself, but he was a truly brilliant guitarist. What strikes me today is not his tapping and tecnique – it is the playfulness!

Stefan: I bought 1984 when it was released and I still think it’s a brilliant album. I love Eddie! We just finished a PreHistoric Animals song that contains a short ”Eddie dedication” from me and Daniel.

8 – The Magical Mistery Machine – Chapter One is a “concept album”. Can you tell us something more about the undernith meaning?

Stefan: The main story is like this: Cora is given the mission to collect humanity’s good and bad sides. Perfection and imperfection. Fear, happiness, greed and so on. She is given a box with a mysterious device inside where all the information will be stored. She gets informed that the world is dying and she is the only one on earth who knows except for her sidekick, Jareth who isn’t even half as brave as her. All information inside the device will be used to recreate earth somewhere else in the universe and they are promised to go there if their mission get’s accomplished. It’s a quirky story but underneath there’s politics, feminism, environmental issues and love. It’s also our way to say thanks to all the good music we’ve listened to so far. Cora might be a little inspired by Greta.

9 – Fear is one of main “enemies” we have to face everyday in this world, since the beginning of time. The same fear that someone tries to “store in a magical, mistery machine” in your album.  This album came out in the year of SARS-COV2 pandemic, that stroke the whole world, including Sweden.  Has the story telling of this album, and its recording, been influenced by that tragic event?

Stefan: Not at all actually. We got the idea over a year ago and the lyrics were written before Covid. I realize that a lot of people might that the pandemic is the inspiration. Actually, I think the album theme has been and will be relevant for a very long time.

10 – Your 1st video (“A Good Start/What a Lucky Day”) has been released just a couple of weeks ago. In the video all the band dies fighting against a zombie army: is it a metaphor or something or just a funny idea?

Stefan:  I had an idea about making a video when we were singing and killing zombies at the same time. Almost like a musical. Then I wanted to find a way to get the same mood as the album and I think I made it. Could be the postapocalyptic world that Cora and Jareth has left. Who knows?

11 – We’re waiting for you on stage. According with pandemic, are you planning an european tour? Have you already planned some italian dates?

Daniel: Well it is hard to plan a tour or even gigs in these days. We have a festival gig in Germany (Art Rock Festival), that has been moved from April to August next year. But we would really love to do some more gigs around Europe, and of course Italy! I went to a lovely festival in Veruno (2Days Prog +1 – Editor’s note) (where we met) to see King’s X, which sadly canceled their tour. But I had an amazing time and made new friends, so I hope we can play there next time! One funny, and quite embarrasing thing from that festival is when I met John Mitchell. I was introduced to him by Octavia Brown, who is involved in making that festival happen. At that time I didn’t really know who he was – which is of course embarrasing. So I just shook his hand and said hi. After that I discovered Frost* which I think is brilliant, and I thought that that guy looks familiar, and I realized that I had met him and that he also is in It bites. So I was a bit starstrucked in retrospect. I actually sent him a messege on messenger to appologise haha.

12 – We can’t wait anymore for the “second chapter” of the story. Do you already started to think about it?

Sam: Yes!! We have so many songs and ideas that it’s hard for us to choose from them all! But we’re well on the way with chapter 2, and we think it’s gonna be great!

Daniel: Yes, and I think we also can promise a surprise for Christmas…..

Many thanks to the band  for this funny and interesting interview.. and, waiting for their Christmas surprise, we give you HERE the link to their Spotify page. 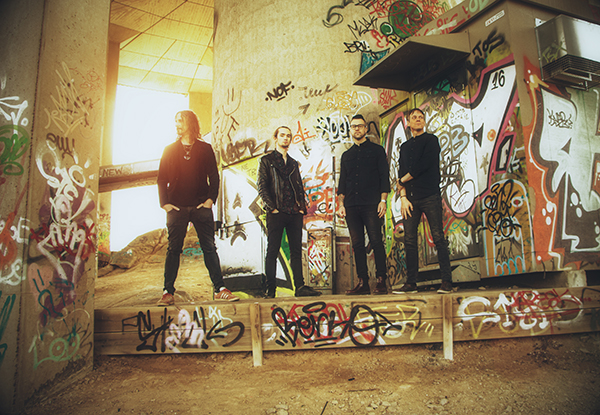